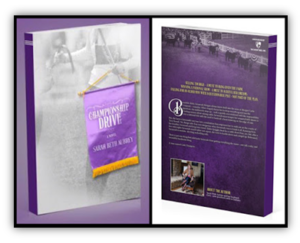 Beautiful, feisty, Savannah Morgan always knew she’d take the reins at Morgan Cattle Company – someday. When tragedy forces her to drop everything and run the operation, she stubbornly steps up – and is quickly overwhelmed with the responsibility. Getting serious about raising cattle, Savannah must temper her unquenchable desire to win a national title with the need to bankroll a farm teetering on the edge of ruin.

But, the farm is Savannah’s one true love, a realization that empowers her to walk out on the cruelty of Troy Howell. Yet, things with Troy turn dangerous when Savannah tries to break it off. Running from her troubles, Savannah and long time friend, Eddie Quiggly, head for a cattle show! Fun, yes, but, after a few wild nights Savannah would rather not repeat, she vows to buckle down and cowgirl up. Refocused, Savannah is resolute- showing and selling only.

There is just one thing that sidetracks Savannah from getting everything she wants – one tall, cocky, and incredibly handsome thing.

Heart of a Champion – Novel 2

IF Savannah Morgan had learned one thing in her short 26 years it was that she would NEVER fall in love with a cowboy again. Not. Ever.

A man named Cade Champion had taught her that painful lesson.

Having spent six months nursing a broken heart and learning to manage her farm alone, Savannah was thrilled with the idea of a change of scenery when her best friend offered a free trip to California’s wine country. Combining wine tasting and the chance to write an article about a beautiful ranch looked like a perfect trip – especially once Savannah meets the handsome and cultured Alexander Kingsley.

With an invitation to stay at the Kingsley Estate Winery for a month and the dashing ‘Zander’ to show her around, Savannah’s heart is sure to be on the mend. Yet, on her first visit to the nearby ranch, fate intervenes in the form of the tall, roguishly sexy Cade Champion. Reeling from all-too-familiar emotions, Savannah immediately plans to ignore him, but when Cade is hired by Zander’s aunt to rebuild the Pedrocelli Ranch show cattle program, Savannah realizes they are going to be neighbors and she struggles to keep her wits.

As the late summer turns to fall, Savannah tries to keep things professional with Cade. But, through a series of ridiculous events, she finds herself dating Zander and yet working alongside Cade AND bunking with him at the ranch! In spite of her best intentions, she is effectively dating one man and living with another!

Despite her refusal to accept his apologies, Cade makes his intentions to win Savannah’s heart perfectly clear. Yet Zander – with his courtesy, class, culture, and love of wine makes him oh-so-appealing, leaving Savannah to sort out exactly what to do.

Ultimately, she has to get back to Indiana to manage her own cow herd, yet she’s left with a tough choice before she goes – which man does she love?